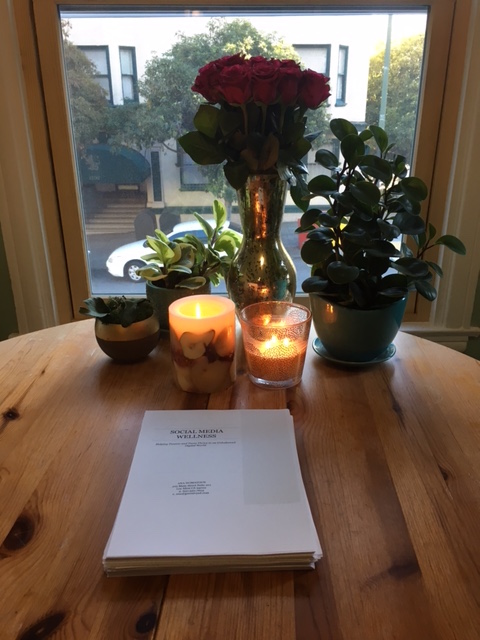 Last week, I finished the draft of my latest book, Social Media Wellness, which is slated to be released next year. After putting the finishing touches on the final chapter, I was absolutely in shock. I have been thinking, talking, and researching this book for so long. After 39 months of working and re-working, I was done. It took a few days to stop feeling surreal (and yes, I fully realize there are still edits to make, and the book has yet to be released – but having a 224 page draft done is worthy of some form of celebration).

This book was all blood, sweat and tears. I wrote the original proposal in the summer of 2013. To give some perspective, I wrote my first book in eight months (while attending grad school and  running Green Ivy) and wrote my second book in ten months. The time I spent on this book – 39 months, to be exact – also represents a time in my life that there was a lot of “stuff” going on. I can’t even begin to list all the happenings (good and not-as-wonderful) but suffice to say, I used a lot of humor to get through the “and then this happened” moments. And, I started over from scratch after writing the first full draft in 2014. There were times I put this book aside for longer than hoped, and there were also certain schools visits or conference presentations that provided me with moments of pause and inspiration and reminded me that everything happens when it is supposed to (even if we don’t always realize it at the time).

Several of those inspirational experiences happened last winter, when I had about ten days of back-to-back presentations in front of very different audiences – camp directors, school administrators, parents, and students – throughout the United States. I talked about some of the ideas incorporated within the book, and helped me realize how necessary this book is for today’s educators, parents and students.

My original interest in social media grew out of a function of my work with teenagers and the fact that my office is located in the heart of the Silicon Valley. Some of the students we work with are incredibly tech-savvy, and others are not even remotely interested. We’ve worked with many schools who are trying to address issues around organization and time-management and screen-based media distractions. We all want to do so in a way that honors the importance of healthy tween and teen socialization while also promoting self-regulation and personal productivity.

In my visits to schools and Green Ivy’s work with students in our office, we’ve spent nearly fifteen years (!) addressing different issues in a way that is practical and solutions-oriented. Regardless, so much has changed in social media in the time I have been working on this book. Two simple examples: Snapchat was not nearly as popular as it is today, and Musical.ly, which now has over 133 million “Musers” worldwide, hadn’t even launched yet. Facebook Live, Periscope and Live.ly, which allow users to watch and create live feed videos, didn’t exist. This book is better not only because of the time I spent on it, but also because of the perspective that wouldn’t have existed if I finished it in 2014 (or 2015).

Still, there are many ways that finishing this book involves the final closing of a chapter of my life in a really good way. Next month marks our 15th anniversary of Green Ivy, and between that milestone and having this book draft done, I am so grateful and excited for what comes next.