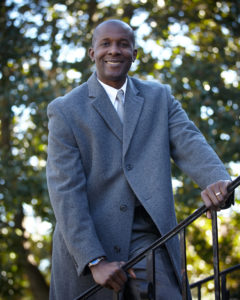 Now and then, I interview individuals who are doing something interesting, inspiring, and entrepreneurial – whether they are pursuing a particular interest, starting a non-profit or business venture, or somehow paved their own way to personal success and happiness. We can all learn from one another on how to better become leaders in our own lives, and I hope you find these conversations as inspirational as I do… this week, I did a Q&A with Damon Tweedy, M.D. author of the recently released “Black Man in A White Coat: A Doctor’s Reflection on Race and Medicine” (Picador 2015). I first read a piece by Dr. Tweedy in Duke Magazine, where we are both alums (I went to undergrad there, and the graduated from Medical School in 2000). I was so moved by his short story I wrote him an email letting him know how much I enjoyed the piece, and how he should write a book. He responded, saying he had just landed a book deal. Fast forward a few years, and I realize a small world connection: our first books were sold by the same awesome literary agent, Rebecca Gradinger of Fletcher and Co.

One of the (many) reasons this book is so interesting to me is that we were studying at Duke around the same time – I was an undergrad in the 1990s when you were at Duke Medical School. In the book, you discuss receiving a full scholarship to Duke Medical School, and how you initially felt out of place given many of your peers seemed to be from different backgrounds than your own. How did you build strength from that experience, and how do you look back on that time?

I came from a working-class family. My dad didn’t finish high school and my mom didn’t go to college. Many of my classmates had parents who were doctors, lawyers, and professors. I also hadn’t gone to a fancy, private college, so I definitely felt out of place. I think that insecurity motivated me to work much harder in the beginning to prove to myself that I could make it at Duke. Looking back, I think that I had great preparation – both in college and with the support and guidance from my parents – for the challenges of medical school and beyond.

Durham has changed a lot in the twenty or so years you’ve been there (and was recently ranked #2 best college town). You currently work at Duke and teach at the Medical School. What compelled you to stay?

I would say it has really been a mix of things – one aspect is that my wife and I met when we were in medical school (she was one year ahead of me), and so I think that there is some nostalgia for our younger days when we first fell in love. Despite the various challenges that I faced, I really enjoyed my time as a medical student at Duke. And as you said, Durham and the Triangle area have changed since I arrived, mostly for the better. There is also a practical side to it as – North Carolina is centrally located to our families in Florida and Maryland. 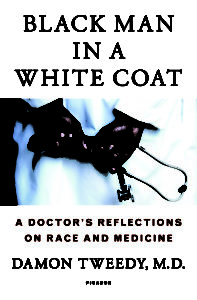 Black Man in A White Coat is highly readable, in part because of how effectively you weave the compelling narrative of your own story of dealing with your high blood pressure, with fascinating (and somewhat startling) research around different race-based health outcomes. As a doctor, and particularly a psychiatrist, how did it feel to expose your story in such a way?

To be honest, I had more than several sleepless nights wrestling with telling my own story. As a psychiatrist, you are typically getting all the information from the client and it’s very rare that you are telling your own story at all. But I felt that in order to have an honest treatment of the issues, and make the book an authentic reflection on my experiences in medicine through the lens of race, I had to bring my own story – shortcomings and all – into light.

Throughout the book, you aptly describe the remarkably different health outcomes for those living in poverty. To you, what was the most painful story that you saw due to poverty or lack of adequate resources?

There are so many to tell – for instance, I rotated through an inner-city emergency room in Atlanta and got to ride out one day on the ambulance where we were called to a remote housing project. I’d seen plenty of bad neighborhoods growing up in the Washington D.C.-Baltimore area, but nothing quite like this. We parked next to an overflowing trash dispenser where the surrounding ground was literally covered with broken glass, used syringes, partially eaten food and rodents. Not far away, I saw these two boys playing outside, seemingly oblivious to their surroundings. The woman we took to the hospital was violent and drug-addicted, and I tried to imagine how differently my life might have turned out if I was one of those boys with a mom like this woman we were taking to the hospital. It was sad.

Throughout the book, you give some startling discrepancies in health outcomes based on race. To you, what are the most shocking and startling statistics?

When I first started medical school, I pretty much had a post-racial mindset. Then, in my first year, professors are suddenly telling [me] about diseases (virtually all of them) that are more common in black people and have outcomes much worse in black people than in whites. And no one really told me why – I assumed it was more socioeconomic factors, but we’ve found that’s only partially true.

To me, one of the most startling realizations was the idea that black doctors did so much worse than white doctors in terms of their own health. There was a study done comparing African-American graduates of Meharry (a majority-black medical school) to the white medical graduates from Johns Hopkins from the same era over a period of more than twenty-five years. The black doctors had higher rates of high blood pressure, diabetes, heart disease, and premature death. Here you had smart doctors struggling with the same health problems that we so often see with everyday black patients. I became one of those statistics when I was diagnosed with high blood pressure as a medical student. It took me nearly a decade to fully come to terms with how my diet of high-salt, high-fat foods – one familiar to very many black people that I’ve known and that I’ve seen as a doctor– was compromising my health. I tell this story in the book with the hope that my evolution on this issue will help other black people make positive changes by reckoning with cultural aspects of diet and nutrition.

What is the most promising change you’ve seen in your fifteen plus years in practice?

There are a lot of different layers to that question. First, Duke has had quite a bit of change. When I first came to Duke , there had never been a chair of a clinical department who was a woman, or one who was black, and now there have been several female chairs and two African-American chairs. The dean of the medical school Nancy Andrews, is a woman, and the new chancellor for health affairs, Eugene Washington, is an African American man. So diversity at the highest levels has certainly increased in the last fifteen years. From a medical perspective, if you look at the two rural clinics that I rotated through in medical school and visited again a few years ago, for example, there is now more continuity of care, so women and men can come back and see the same doctors at the clinic, which makes a huge difference. It remains to be seen, however, if healthcare reform has the impact that was hoped for.

What is your hope with this book?

For readers less familiar with African-American health issues, I want to use human stories to leave them with a sense of the many ways that race is an important issue in medicine. For African-American readers, I want to give voice to some of their stories and help inspire them to take better care of themselves. For everyone that reads the book, I want to offer hope that broader racial divisions can be mended, one human relationship at a time.