Now and then, I intervie 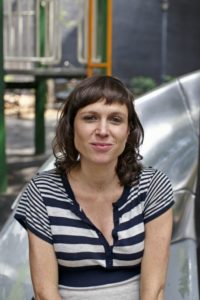 w individuals who are doing something interesting, inspiring, and entrepreneurial – whether they are pursuing a particular interest, starting a non-profit or business venture, or somehow paved their own way to personal success and happiness. We can all learn from one another on how to better become leaders in our own lives, and I hope you find these conversations as inspirational as I do…

This week, my Inspirational Q&A is with Courtney Maum, whose debut novel, I AM HAVING SO MUCH FUN HERE WITHOUT YOU, has basically been acclaimed by everyone everywhere (Publishers Weekly! WSJ! Today Show! tons more but you get the point!) as a must-read book this summer (and fall, for those of you in France and other areas of the world). It is probably every writer’s dream to have such an amazing debut experience – and no, not at all common – but what I like best about Courtney’s story is that this book is basically over a decade in the making and re-making. It’s not just a story of amazing triumph, but of going back to something and having the patience to do it over again.

Courtney and I have something wonderful in common – lovely, powerhouse literary agent Rebecca Gradinger sold both of our first books. Rebecca handed me a copy of the book last month when we met in NYC, not knowing I was on my way to Paris (where the book is set). I finished the book in less than 48 hours in between my own work because I basically couldn’t put it down. And, I had the added treat of reading in the Palace des Vosges and the Luxembourg Gardens, as well as a few unnamed cafés.

Q. I still remember where I was standing when my first book sold – on the corner of 17th and Broadway clutching my cell phone to hear the news. Where were you when you found out this book had sold?

I’m so grateful you’ve asked me this because I cherish the answer: I was seven months pregnant and had just gone for a swim in the river by our house in order to make the July humidity more manageable. I had come back into the house and stripped off my wet bathing suit, and was accordingly naked when my agent called—I got the news sitting naked on my couch! 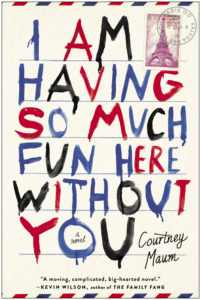 Q. Your debut novel, I AM HAVING SO MUCH FUN WITHOUT YOU, is mainly set in Paris, where you moved after graduating from Brown University. Who or what encouraged the move? What did you do while you were there? What made you come back to the States?

I studied abroad in Paris and I just had that “this is it” feeling that you get when you know a match is right. It can happen with romantic partners, as it can with cities. I just felt like Paris was a place that I could thrive in: the way that I think and act and am inspired simply makes sense there. My senior year of college, I had a French boyfriend which made the move easier in terms of logistics, but we ended up breaking up three months after I arrived. He said he’d drive me back to the airport and I was like, “Are you kidding? I’m staying!” Rather naively, I went to Paris without a working visa so I had to take a lot of sketchy jobs—one was working for an online psychologist, another was consulting as a trend forecaster for a French woman who threw chairs around the office when she wasn’t happy about something. I finally ended up getting a visa to work as a party promoter for Corona Extra where I worked for three years. I ended up moving back after five years in France because my family and friends were beginning to forget that I existed—I have a younger half-brother who wrote an essay saying that he had a sister who was French. Plus, my husband (who I met three years into my Paris sojourn) is a French filmmaker who had never lived anywhere but Paris, and New York City felt like an obvious and exciting move for two restless, creative people.

Q.  In your acknowledgments of the book, you mention how this novel might have ended up in a drawer somewhere. How long have you been thinking and writing this novel?

I believe I said that it would still be in a drawer somewhere because it was in a drawer for ten years! I wrote an initial draft in 2004 when I was still living in Paris, but it never sold. In 2013, I re-wrote the entire thing from scratch. The hard work paid off! 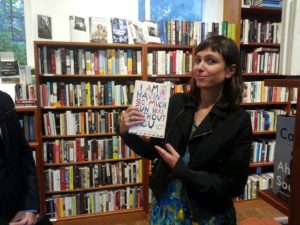 Q. The book has received some amazing – and well-deserved critical acclaim (Congratulations!!). What has been the most surreal, surprising moment for you in this book publishing and release extravagazna (in a good way!).

Oh my goodness. Every single day is surreal and delightful, to be honest. Two particular moments come to mind. Right before publication, I was surprised to hear that Grandparents.com had selected it as a book club pick. I laughed at first to hear this, but then, when I saw their other picks (Walter Kirn! Donna Tartt!) I was incredibly moved and excited to think that I had written something that might connect with an older generation, people who have been married, re-married, who have lost loved ones, who have children who have kids. And then there was the day that I was surprised by an excellent review in the Wall Street Journal. That fantastic write-up by Sam Sacks means the world to me because it reminded readers that this is a unisex book. I am beyond grateful for the “summer reads” mentions we’ve received in women’s magazines, but I think it’s left the menfolk thinking that this book isn’t for them. The entire novel is written from a man’s point of view—and it’s a story that can resonate with women just as powerfully as it can with men.

Q. When and how do you write best? Do you prefer silence? Do you work best with ambient noise? You have a daughter –  how has that changed your writing process (if at all?)

I write best in the morning and I need total silence. I also need to be elevated—I like to write with a view of something, even if it’s a parking lot! When I really need to hunker down and not be distracted by the digital amusement park of the Internet, I’ll go somewhere without my phone and write by hand. I have one baby daughter, and it has changed my writing process in that I no longer have the luxury of futzing about—when I have a free moment, I prioritize and write.

Q. For a young woman – perhaps a recent college grad – wanting to move abroad after college, what advice would you give? What would be something you wish you would have known before doing so?

My first piece of advice would be: Do it! Make sure you have the means to have a workable life while there: open a bank account in the country you’re moving to, even if you have nothing to put into it, and ditch your expensive American cell phone for a cheaper, local one. Try to get a working Visa or a student Visa—enroll in cooking classes, art classes, whatever you have to do to get a visa because it is incredibly hard to safely (and legally) function without one. And then: get a job! Working in cafés in Paris helped me perfect my language skills and make friends in a city where the natives are very insular and in no great rush to befriend anyone they’re not already friends with. Do whatever you have to do to go out and experience the country with non-Americans—we’re everywhere, and it makes it far too easy to have an American experience in a foreign place. Don’t cheat yourself—immerse yourself in the new culture, take risks, and live.

Q. In my recent book, The Myth of the Perfect Girl, I talk about how young girls and women often struggle with this pressure to live up to some preconceived standard of success. For creative individuals, the culture of perfectionism can be even more intense – and as a writer, it can often be debilitating. Have you ever dealt with the external pressures of perfectionism, and if so, how did you deal with it?

Well, I’m a Type-A Virgo so this is the struggle of my life. To be honest, I just choose realms in which I am unforgiving with myself and demand perfectionism: in my writing, and in my professional life, for example, and then I have other areas where I let things slip through the cracks: housecleaning, cooking, being a “perfect” mom. There are always areas in which I allow myself to slip and slide.

Q. Your book highlights some of the real beauty of the French lifestyle and attitude – I loved the bit about how the French save and spend their money.  What do you think Americans often misunderstand about French culture and/or lifestyle?

Thank you! This is a huge compliment coming from you! I think that Americans don’t understand how fiercely loyal the French are. They’re always portrayed as standoffish and cold, but the truth is that once you make the efforts to really understand and get to know a French person, you are going to have a friend for life. And they’re incredibly family-orientated—a lot of Americans haven’t had the chance to realize that.

Q. What is your favorite way to spend a Parisian day?

A long walk through the Jardin du Luxembourg and across the Seine for a hot chocolate at Angelina, followed by a stroll through the Tuileries and the Cour Carré de Louvre, ending with gallery visits in the 6th, a visit to my favorite depot-vente in the 11th, (I’m not going to name it! It’s a secret! Mine, mine, mine!), two glasses of champagne and a raucous dinner in a bistro with my husband and my Italian father-in-law. If it’s the weekend, you can find me at the Marché aux Puces, dining at one of my favorite all-time addresses, Paul Bert!

Q. What is the one question you wish I’d asked (and please answer it, too!)

When can we get together for a drink in Paris?

Best movie of all time: No way. I have too many! “La Guerre est Declarée” is a recent favorite.

Last book you read for fun:  “The Autobiography of Us” by Aria Beth Sloss

Best travel tip: Turkish foutas are a lightweight must! Great as colorful bedspreads, picnic blankets, sarongs, and head wraps. And as towels, duh.