Now and then, I interview individuals who are doing something interesting, inspiring, and entrepreneurial – whether they are pursuing a particular interest, starting a non-profit or business venture, or somehow paved their own way to personal success and happiness. We can all learn from one another on how to better become leaders in our own lives, and I hope you find these conversations as inspirational as I do…

I found out about Laura Newland’s book, Chasing Zeros, from a Duke Magazine article mention, and got in contact with her because I was curious as to her story. She wrote this book while working full-time, which I found to be incredibly amazing, and is a recent college grad (well, way more recent than me!) who talks about her experience feeling the pressure to work in finance. My first job post-college was also in finance (which I talk about in an interview here), and though I don’t have a completely similar experience to Laura’s, I do think that ballooning student debt makes people feel as though they have a narrower window of choices 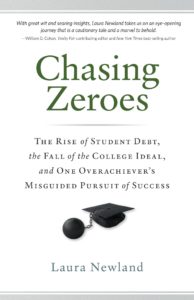 Q. Chasing Zeroes is your first book, and seems to be a journalistic memoir on your foray into (and out of) the world of finance. What inspired you to write this book?

I started writing Chasing Zeroes during my final semester of college. Graduation was around the corner, and I already had a job lined up. This may sound like a best-case scenario, but something didn’t feel right. I began reflecting on the previous four years, and realized that my college experience had unfolded in a way I never anticipated. I thought about how college life was unlike anything advertised in the glossy promotional literature and admissions guidebooks that I had pored over as a high-schooler. Nothing had prepared me for the reality of college, so I wanted to write a candid story about what it’s really like—the story I wish that I (and my parents!) had read when I was in high school.

Q. In reading your book, I realized we had a lot more in common than you might even know – I landed the coveted summer internship with an investment bank in 2000 (on a dare), though I had no real connections to speak of and landed my job by emailing with a Duke alum who decided to help me out. The (paid!) internship led to a full-time offer after I graduated in 2001. I was laid off from my job as an investment banking analyst at a big firm shortly after 9/11, which I still consider to be one of the most pivotal moments of my life. What was the most pivotal moment of your life that led you to leave a job in the financial sector?

The most pivotal moment was certainly the financial crisis. I was in New York during the aftermath of the financial collapse, as it became increasingly clear that the banks were at fault. Nevertheless, that January, as Americans were losing jobs and homes, Wall Street handed out $18.4 billion in bonuses—the sixth-highest tally on record. The more bankers I met, the more I saw their inability to assume any blame. I didn’t want to be a part of that.

Q. Though you focus mainly on your personal experience as a student at Duke University, I know from my own work with millennials and young adults that so many of the same challenges and struggles around student debt, peer pressure, and giving into the rat race mentality are similar for young people no matter where they go to school. What has the response been to your book from Duke peers, and from young adults who went to other universities?

My story happened to take place at Duke, but it’s a story that is unfolding at campuses across the country. I like to think there’s something universal about the coming-of-age aspect of Chasing Zeroes—of trying to find my place and stumbling along the way. I have been consistently touched by the response of my readers—parents, students, and even current and former bankers themselves—who have shared their own story and thanked me for put a voice to feelings they have long held about the higher education system in this country.

Q. Reading some of the book left me feeling as though you were left with a somewhat distasteful college experience. What were some of the positive people and experiences that were meaningful to you?

I’ve heard this a lot, and it’s an understandable reaction. What I remind people (and what I tell my parents, again and again) is that Chasing Zeroes is a book about one aspect of my college experience. I chose to focus my writing on the topics of student debt and the Wall Street recruiting machine, because that’s where I could contribute a unique perspective. I didn’t have anything too innovative to contribute around the usual college tropes—studying abroad, going to frat parties, making lifelong friends, etc. I did all of those things, and have many great memories because of it, but that’s the side of college everyone already knows about. I wanted to write
about its underbelly.

Because I wrote most of Chasing Zeroes while working full-time, I woke up at 4:00 each morning so that I could write for a few hours before heading to the office (so for most of my early 20’s, I had the bedtime of an 80 year old!). I also spent much of my weekends writing in coffee shops. I kept telling myself that if writing this book was easy, someone else would have already done it.

Q. I couldn’t help but notice the similarities between your description of your overachieving ways and of the many girls and young women I talk about in my book, The Myth of the Perfect Girl. Why do you think the Culture of Perfectionism is so prevalent among young women today? How does that encourage/discourage so many of them from creating their own vision for success (rather than borrowing someone else’s blueprint for success)?

To use your words, I certainly borrowed someone else’s blueprint for success. It seemed safe. And yes, you could argue that I was the victim of the Culture of Perfectionism. It’s wonderful that today, girls and women are expected to be able to accomplish all that a male can. But it’s as if new expectations have been placed upon us, without any of the previous expectations—being pretty, skinny, stylish, sweet, charismatic, and on and on—being lifted. It’s easy to look for shortcuts, or conventional paths to success. That is the trap I fell into, and in many ways that is what Chasing Zeroes is about.

Q. Looking back, and knowing what you do know now (and realizing, of course, that hindsight is 20/20!) what would you have done differently in college and immediately afterwards?

I wish I had taken more time in college to figure out what interested me. Because I struggled so much during my first semester, I became intimidated and lost my confidence. A sense of fear and doubt followed me for far too long. If I could, I’d go back and give 18-year-old Laura a huge pep talk. I would’ve been more daring in the classes I took and the experiences I sought out, and I likely would have chosen a career path that better suited me. But, had things unfolded differently for me in college, my life wouldn’t be what it is today…and I really like how things turned out! Without my challenges at Duke, I never would’ve written Chasing Zeroes, which is the most challenging and rewarding thing I’ve ever done. And had I taken a different job out of college, I never would have met the most incredible guy I know, whom I’m marrying in two months. Professionally, I’m still trying to figure out what will make me happy in the many years to come (aren’t we all, though?), but I’m getting there…

Q. Student debt is obviously a huge issue in this country, and is one reason young people feel trapped in following a career path based on short-term financial rewards rather than a longer term vision of personal purpose and success? What are simple, impactful ways that students can minimize their student loan debt and increase their ability to take healthy risks personally and professionally?

I would encourage all students to know exactly what they’re getting into financially when they select a college. When you’re 18, it’s difficult to comprehend various levels of debt, because you have no frame of reference for dealing with large amounts of money. High-schoolers, however, should talk to their parents about how various levels of debt may affect their decision-making when they graduate from college—certain jobs or graduate degrees may be financially-prohibitive depending on the level of debt accumulated.

Favorite way to spend a relaxing afternoon: Watching reruns of the West Wing

Last vacation: Yosemite with my fiancé and his awesome family

When I am writing, I always: Listen to classical music

Song that leaves me inspired and motivated: Carry On, by Fun

First car: In high school, my sister and I shared my parents’ old Honda Accord

Childhood memory that brings you joy: Traveling across Alabama with my mom and best friend Rebecca for soccer games