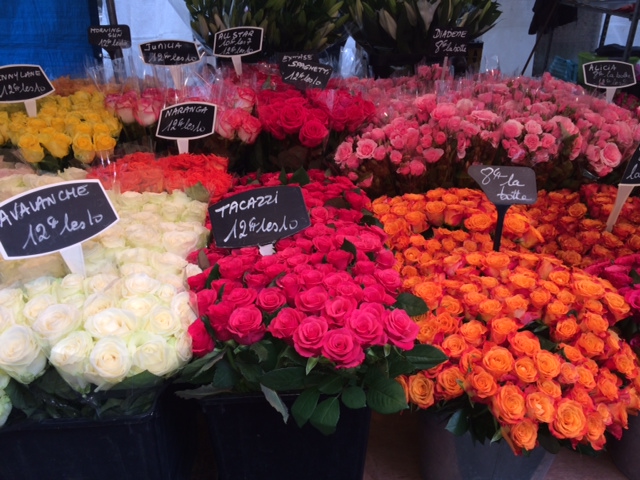 I was sitting at my local coffee shop yesterday morning when I inadvertently let out a deep sigh. Subconsciously, it was probably a sigh of relief and gratitude for a “Wait, all that happened? In one year? And I am still standing? And grateful? And blissfully happy?” sort of year.

The lithe young woman sitting next to me laughed knowingly, as if my audible expression was comforting.

“If it helps, I am in the middle of moving,” she offered, in the way one does when seated in a San Francisco spot filled with regulars.

I immediately empathized – moving can be deeply unsettling, regardless of the reason. I’ve never personally been much of an mover, which may explain why I’ve cheerfully spent nearly thirteen years in the same apartment. I absolutely adore my place (the light! the windows! the cozy comfort!), but never thought I would be here this long. A few years, I remember once thinking, until one year piled on top of the next. Now, I read stories about New Yorkers who live in the same rent-controlled one-bedroom apartment for fifty-three years, and I think, I can see how easily that could happen. Some people move as a way to get rid of stuff, but given the high price of Bay Area real estate, I’ve found it more cost-effective to spend time New Minimalizing and Kon-Maring my apartment. If and when there is reason to move, I will happily do so. Until that need arises, I see no need to prematurely pack boxes.

I wondered where she was moving to, and off-handedly expected to hear about a cross town move to the Outer Richmond or possibly further out to a suburb like Walnut Creek. Perhaps she was moving to Oakland to be with a significant other or getting married and relocating out of state. When she said “India,” and stared at her empty coffee cup with sense of lingering nostalgia, I thought there might be an issue forcing her to leave. She quickly regained momentum and, sensing my concern, explained she had taken a job with a newly formed non-profit focused on alleviating global poverty. It was clear that she had some level of discomfort with the new life she had chosen. Given her educational background and internship experiences, she reasoned this was definitely the right move, yet she still looked noticeably uneasy. She wasn’t sure where her home base would be, or if she would even have one.

I asked what worried her most, and her answer surprised me:  “I am scared I will be priced out of San Francisco forever.” She was currently sharing a two-bedroom rent-controlled apartment with a friend, and was sure her landlord would considerably raise the rent after they left. If and when she wanted to return, she wasn’t sure she could.

After she found out how many years I’d lived in San Francisco, she looked to me for comfort and reassurance. “The real estate market has never been this crazy, right? It’s gone up and down in the years you’ve been here, right?” I could tell she needed to hear she could come back, and that leaving now didn’t mean leaving forever.

It could have been easy to give in to the mania and explain how I no longer look at listings because they make me sad, and talk about how so many friends and yoga teachers and small businesses have left that it sometimes seems impossible to make sense of it all. In that moment, though, I was caught by her understandable fear. Here she was, in her late-twenties, about to embark on an amazing new adventure doing work that was meaningful and purposeful, and she was worried there wouldn’t be a place for her if and when she decided to return. In reality, there are always many ways – they just might not be as planned. And, one of those ways might end up being even better than ever imagined.

In other words, things may not happen on the first try, or the way we plan, but that doesn’t necessarily mean they will never happen. In her new book Fail, Fail Again, Fail Better: Lean in to the Unknown, Buddhist teacher, author and nun Pema Chödrön offers the wise reflection,“It’s a little hard to tell, actually, what’s a failure and what’s something that’s just shifted in your life in a new direction.” Most difficult transitions center around gracefully acknowledging and letting go what is not meant for us in order to focus on the opportunities that are blossoming, often unexpectedly. I’ve found that what can initially seem to be a wonderful blessing might become something altogether vexing, and vice versa. This could include friendships, relationships, work opportunities, living situations – everything is in a state of constant flux, and any desire and stubbornness to control the future often leads to the greatest unhappiness in the present.

In today’s world, it’s becomes easy to get caught up in the fact that we should be able to have it all, all the time (nope, not possible). Like a trapeze artist swinging from one bar to the next, no one can grab hold of a new bar without letting go of an old one. Well, maybe if you’re Cirque du Soleil flexible, but for the rest of us… no. We’re usually trained to focus on the anxiety and fear, and in doing so we lose patience and overlook the unexpected possibilities coming our way. If the young woman’s intention is to someday move back to San Francisco, I am certain opportunities will unfold to make that possible. Perhaps not the way she planned, but who knows? Who are we to say something might or might not happen? She will likely end up with a better place suited for her needs in that moment.

I see this early and often in my daily work with adolescents and young adults, in part because their perspective can be rather focused around a limited set of experiences. An easy example is when high school seniors (and their parents) become caught up in the college admissions process. I’ve seen a student receive acceptances from nine out of eleven schools, and become fixated and upset about the two rejections/wait-lists. Instead of focusing on the *nine* opportunities for admission, he or she becomes devastatingly upset at the rejection from the “dream school.” Most students are able to re-calibrate in a day or so, and realize that what is available to them might be even better than they had originally imagined or planned. But some are not.

In many ways, this year made me feel as though I was permanently standing on a wobble board (or hoverboard, depending on your age demographic). Wobble boards can be pretty fun once you get the hang of them, though in the beginning it can seem as though the bottom will fall out at any moment. Hover boards have the same effect (see: Mike Tyson falling) though given the number of stories I’ve seen on hoverboards catching fire, I remain wary. But I digress. Wobbles include a health scare, the death of a loved one, an unexpected job loss or career shift, or even changes normally viewed as positive like getting married, buying a house, beginning a new job, getting a promotion or starting a family. Saying good-bye to something forever seems tough, so focusing on saying good-bye for now recognizes there’s no way to fully know how and when a road might turn, and when we will end up in the same place once again. In the here and now, I’ve found it’s sometimes crucial to say goodbye in order to welcome the new. For me, focusing (and re-focusing) on the present creates my opportunity to be flexible to inevitable changes, and promotes a more peaceful path to finding solutions with a renewed sense of balance. It’s not always easy, but it works.

In the end, the young woman’s fear wasn’t entirely about real estate – though that hunt can easily seem unsettling, especially in the if-you-have-to-ask-how-much-it-costs, you-probably-can’t-afford-it Bay Area. It was really more about having faith that everything we need will appear at the time it’s meant to, and how an openness to the unexpected allows us to see through potentially different colored glasses than we initially plan. From the outside, it could easily seem that my 2015 was the year so much turned upside down, OR it could seem as though so many things turned right-side up. I found my transitions were most impacted by my perspective, attitude, and willingness to lean into my own discomfort around change. For me, once I was able to do so (around mid-October), a renewed sense of ease and calm fell over me, and things began to fall in place better than I ever could have imagined.

As I said good bye to the young woman whose moving truck is coming today at 1 pm, I wished her a smooth transition to the next steps in her life journey, which remains my hope for all of us in 2016 and beyond.

1 thought on “The Hoverboarding of 2015: How A Little Wobbling Can Make All the Difference”